If you’ve ever watched a tennis match, chances are you witnessed a warning in tennis from the “Umpire” (the chair judge). No human being is perfect, emotions in tennis are hard to control so warnings in tennis are common. Players like Nick Kyrgios or Rafa Nadal have had several discussions and anger with the chair umpire… Scroll down and find out why players get angry and in which situations a warning applies

Well, what’s a warning in tennis?

No one is perfect, we all make mistakes and go over the top, never better said. The most basic definition I can give you is that the translation of “warning” is “Warning in tennis”, and this is given to a tennis player who has not followed the rules of tennis or has behaved in a disrespectful way on the tennis court. Now, many times warnings in tennis are very controversial since the decision is made by the chair judge and in many times, he makes unfair decisions and that is why most tennis players have had some kind of argument with the Umpire throughout their career. 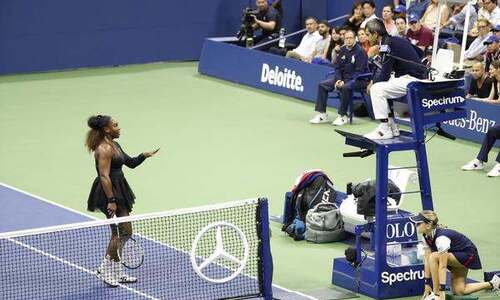 There are different kinds of warnings in tennis:

Tennis is an intense, endurance sport and that is why it must be played constantly without major interruptions. Therefore, the loss of time by players is intolerable in this elite sport.

These are the general rules but in the case of uncertainties such as rain, change of racket, damaged shoes etc. it is allowed to have a slightly longer rest as these problems have nothing to do with tennis players.

Now if the chair umpire thinks that a player is losing time on purpose he will be given a first warning that does not affect the player, the second would give a free point to the opponent and the third and last one could mean the disqualification of the player.

A very famous tennis player who always gets into these troubles is Rafa Nadal. Nadal has a ritual of actions to prepare himself before taking a serve and many times time goes by and he is constantly warned. I leave a video for you to see Rafa Nadal when he is penalized for wasting time:

Why is a warning in tennis not good?

Since we’ve learned what a warning in tennis is, and specifically going into time penalty warnings, now we’ll see its consequences and why any tennis player should avoid them.

On the other hand, on the third or subsequent warning of a violation of the rules, the Umpire will decide whether to disqualify the player or whether to apply a more severe penalty such as paying a fee for his misconduct to the ATP or WTA (this can be thousands of euros). Although if the violation of the tennis code of conduct is very serious, it will skip the intermediate steps of sanctioning points, constituted in the tennis warning rules and proceed directly to the expulsion of the player. Finally, in doubles matches, the tennis player who has violated the rules will not be sanctioned individually, but rather the entire pair will be penalized.

So you see… if you compete in prestigious tournaments, try to control your emotions and follow the rules to the fullest. Be warned.

Here you can see a video of Nick Krygios at the Cincinnati tournament where he provoked numerous actions in violation of the tennis code of conduct. Finally, he was expelled from the tournament and fined $113,000.

Tennis is a sport of respect and sportsmanship, I encourage you all not to provoke this kind of drama as it will not only damage your image as a tennis player, but also that of tennis in general.

Have you learned yet what a warning is in tennis? If so, you are welcome to comment on this article,  I hope it was useful for you.